I just had the best anniversary! My husband gave me a card, among other things, that ended with "With all my love, your husband." I have the best husband in the world, and I don't tell him that enough. It's hard to believe it's been four years since our wedding. We went to Vermont to take anniversary pictures to celebrate. Hopefully I can share them with you soon!

Actually, we are both recovering from a week long cold. During which, all I wanted to eat was soup. Thick chicken soup with dumplings. This is the best thing to eat when you're under the weather. It will warm you right up. 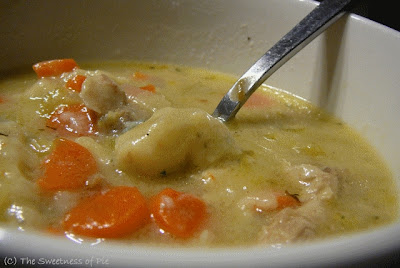 Preheat oven to 350 degrees. Season chicken thighs with salt, pepper, oregano, and thyme. Roast for 20 to 25 minutes with the skin side up in a flame proof casserole. Take the chicken thighs out. Remove the skin and bones. Divide the chicken into bite size chunks and set aside. Add the olive oil and heat it on medium high heat. Cook carrots and celery until tender. Turn the heat down to medium. Add the skins and bones back in the pan with water and Worcestershire sauce. Bring a boil and let simmer for 20 minutes.

In the mean time, make the herb dumplings. Stir together the flour, salt, oregano, basil, baking powder, ground black pepper, and parsley in a medium bowl. Add butter and rub into the mixture with your finger tips. Stir in the milk to make a very thick batter. Bring the soup into a boil and drop the dumplings in with a spoon. Simmer for another 20 minutes.
Posted by hong-lean at 9:16 PM 0 comments

Well, it has been a while. I will try not to neglect my little blog so long next time. Get sneak peeks for what's coming up by subscribing to The Sweetness of Pie on facebook!

Summer has passed by us quickly. It took our tomatoes the whole season to grow on an apartment balcony. We now have three ripe tomatoes. The rest are still pretty green and it's getting chilly out. Some people suggested harvesting them and leaving them on the counter. Other people suggested a green tomato pie. You know how much I like pies. There's no need to guess which route I chose. 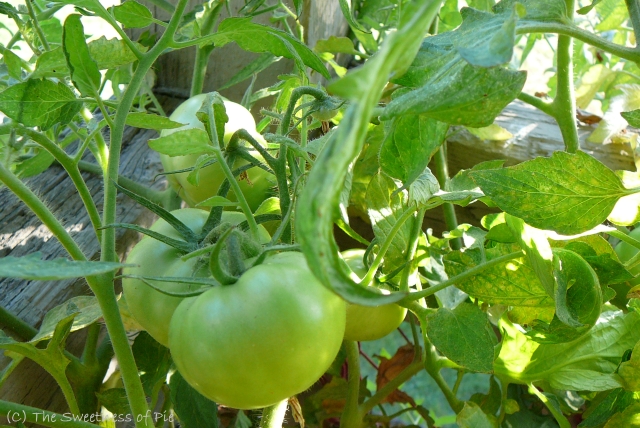 The recipe I used is a simple one. It's very much like an apple pie recipe. The cooked green tomatoes tasted to me like plums. 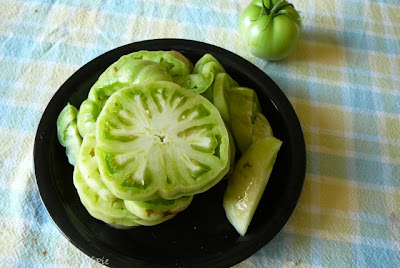 Pulse the flour, salt, sugar, and butter in a food processor until it resembles coarse cornmeal. Add ice water and pulse until it comes together into a ball. Form into two disks, wrap it in plastic wrap and chill for 30 minutes in the fridge. My tiny 2 cup food processor processed this twice to make two disks.

Preheat the oven to 400 degrees. Cook tomato slices, lemon peel, lemon juice, salt, and ground cinnamon in a medium saucepan over low heat. Combine sugar and corn starch and stir into the mixture. Cook about twenty minutes, or until tomatoes are softened and filling has a thick consistency. It never really turns clear for me. Add butter and remove from heat. 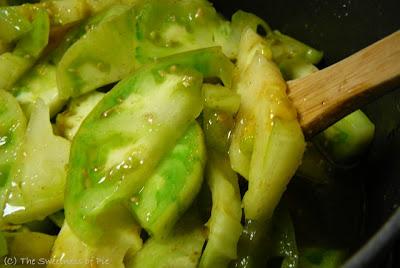 Roll out the crusts for a 9-inch pie pan. Pour in the filling, top with crust. Cut slits and brush the top of the pie with milk and sprinkle with  Demerara sugar. Bake for 35 to 45 minutes until the crust is golden brown. Cool for an hour before serving. 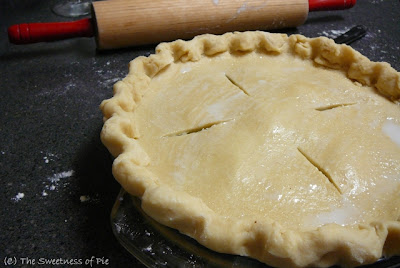 Served with vanilla ice cream. I hope you enjoyed this post! Until next time! 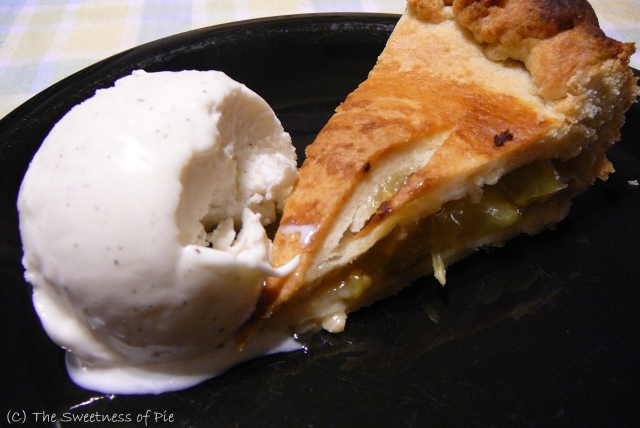 Hi There! This is Serena, Shirley's sister. This drink is an all-around excellent drink for all of summer. From escaping the smoldering summer heat to the end of the season when you want to savor the very last bit of it. This sangria recipe is slightly adapted from Emeril Lagasse. 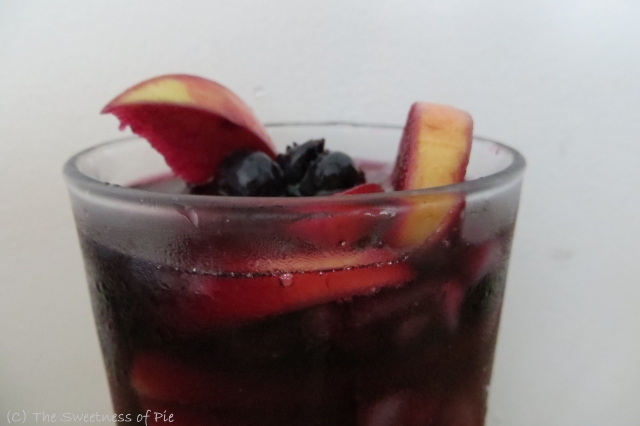 Mix lemons, blueberries, strawberries, green apples, and raisins in a large bowl. In another large bowl, add one layer of mix, drizzle 2 tablespoons of agave sugar. Repeat three more times until all the fruit and agave sugar are mixed. Pour in brandy and wine. Marinate for at least 24 hours. Serve with ice and sparking water.

Are you sad summer's coming to an end? Make some peaches n' cream pops to savor the end of summer!

Slice peach. Blend all ingredients in a food processor. Pour into Popsicle container and set in freezer until frozen. 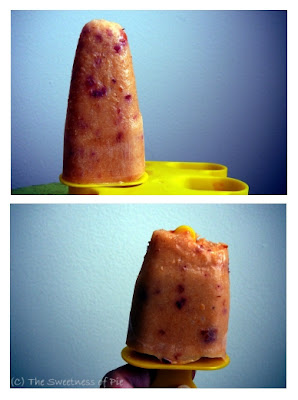 Email ThisBlogThis!Share to TwitterShare to FacebookShare to Pinterest
Labels: dessert

This is my first time making strawberry rhubarb pie! They say this is an old time-y pie, but I don't remember ever eating one. Perhaps I have once or twice, but they didn't stick in my memory. 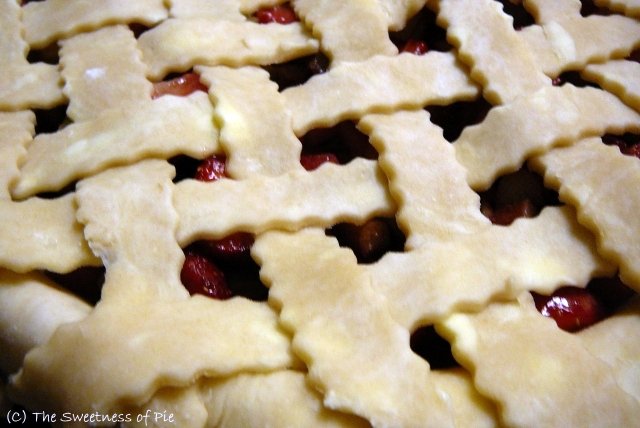 But many people have told me it's their favorite pie. Since my in-laws had rhubarb growing in their suburban garden, I figure this is a good opportunity to try baking one myself. 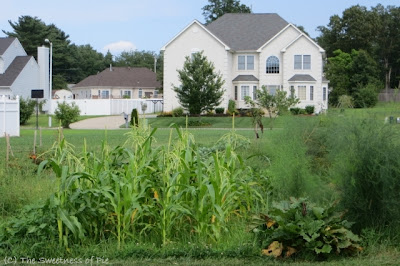 I adapted the recipe from Epicurious, with only 2 cups of cut rhubarb and milk instead of egg for glazing. I also had about a quarter of the pie dough left in the end. 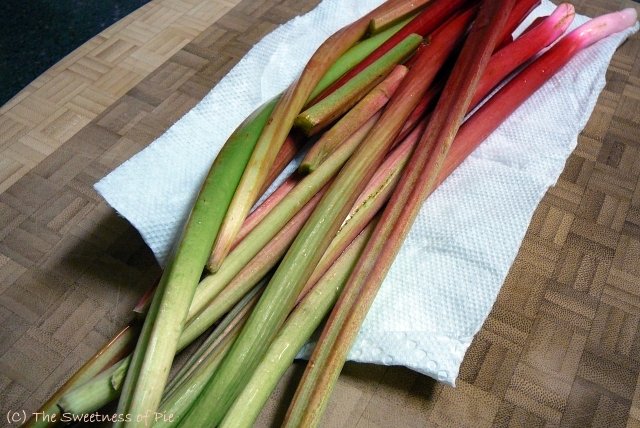 The strawberry was from the market. 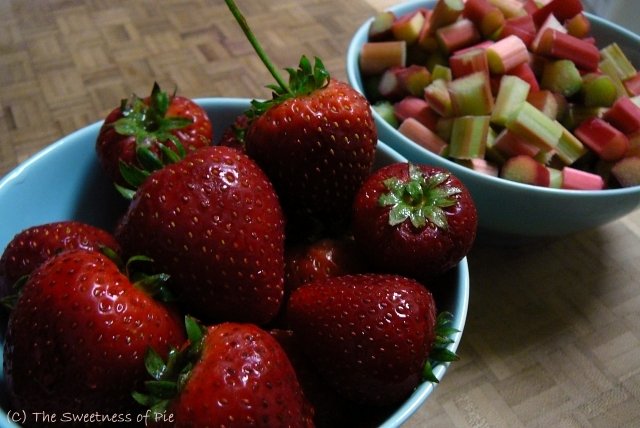 The pie was delicious but I had some issues with the crust. I learn best by doing. So here are my lessons learned.

(2) Leave only one inch or less overhang on the bottom crust. Otherwise the crust will sag in the oven. But build the edge up taller than the pie pan so it doesn't shrink too much. 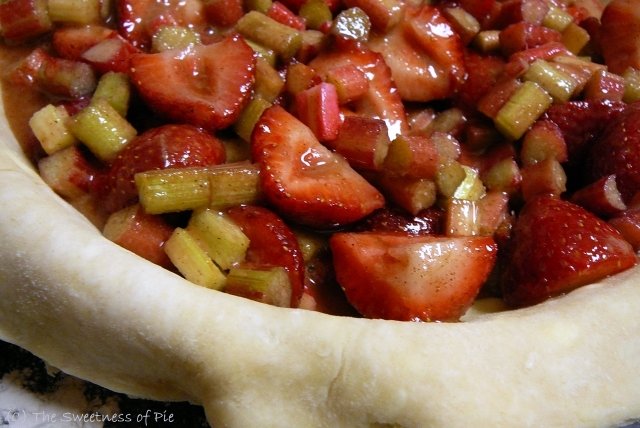 (3) Make larger crimps when working with a crust made with vegetable shortening. Because the crust will expand and smaller decorations tend to lose shape.

(4) Cool pie completely before covering. Otherwise the condensation will make the crust soggy.

(5) Strawberry rhubarb pies are so yummy! Make more!! Whatever issues I had with the crust didn't matter, because in the end, the pie was delicious and we got to share it with our friends at the church picnic. 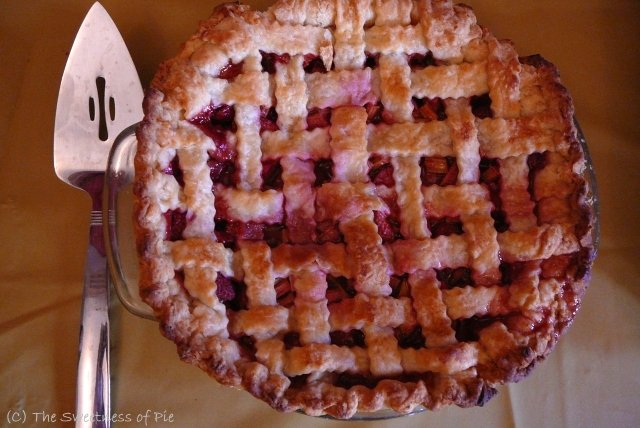 And eat more pie everyone! Until next time~